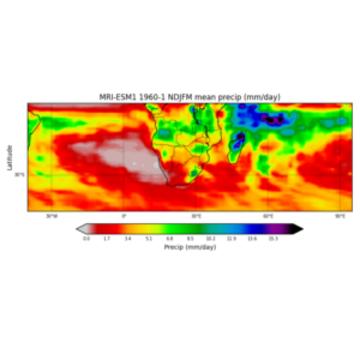 I'm a physical geographer and climatologist interested in African climate change, ENSO and its teleconnections, and the effects of aerosols on the troposphere. I previously studied Geography at St Edmund Hall, Oxford, where my dissertation focussed on the links between Indian Ocean SST dipoles and Southern African rainfall patterns (supervisor - Professor Richard Washington). I received the David J. Cox Prize for Geography, the C.D.D. Gibbs Book Prize for best performance in FHS Geography, and was runner-up in the J.C.A Meldrum Extended Essay Prize. I come from the New Forest, Hampshire.

East Africa is an area vulnerable to climate change and variability, especially in terms of rainfall. The livelihoods of many people in the region depend on rain-fed agriculture, and consequently the climate acts as a constraint on development. There have recently been a series of severe droughts, for example in 1983-85, 2010-11, and ongoing at the time of writing; the threat of humanitarian crises (in Somalia especially) brings the issue of climate impacts in East Africa into sharp relief. It has been estimated that around 17.5 million people are at risk from food shortages in Ethiopia, Somalia, and Kenya. The recent decline in the 'long rains' (March-April-May) is the most significant such drying signal in the region's observational record, but its causes are still not certain. Furthermore, the current generation of general circulation models (GCMs) project a wetting signal for the region in future, in direct opposition to recent trends; this has been termed the 'East African Climate Paradox'.

This discrepancy between models and observations requires assessment of models that goes beyond their ability to reproduce mean statistics; it has been shown, for instance, that models can produce seemingly accurate rainfall via unrealistic mechanisms, which in turn casts doubt on the reliability of their future projections. In addition, model performance over East Africa is highly variable, meaning that approaches using large model ensembles often conceal significant biases. There is a need for a process-based model assessment approach, which considers the dynamics of models. My research investigates the drivers of East African rainfall on scales from the local (the influence of regional topography) to the global (teleconnections to the El Niño Southern Oscillation). By analysing the ability of models to reproduce such drivers, the work aims to provide an assessment of which models can be considered most reliable for making future rainfall projections, which are vital for climate adaptation.

School of Geography and the Environment